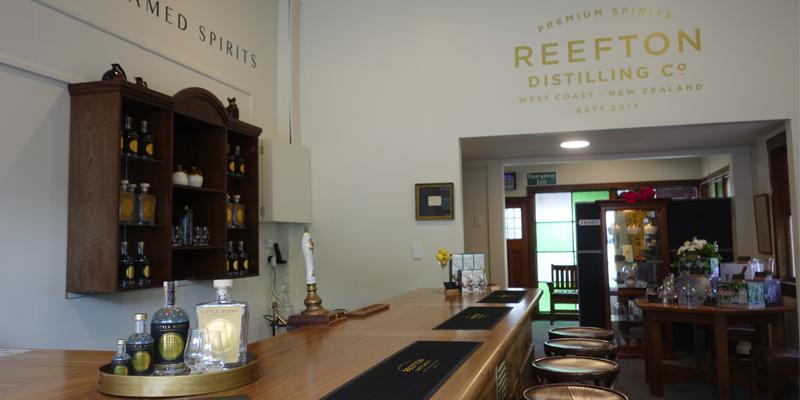 In the heart of the historic West Coast town of Reefton there’s a gutsy distillery applying a modern take on an age-old industry. A unique story lies behind this fledging business and already people can’t get enough of its pure botanical spirits.

“We chose an equity share offer via Snowball Effect and raised $1.385 million from 221 investors,” says Patsy. Individual investors are made up of locals from the Reefton and West Coast community, wider New Zealand and Australia. Several larger investors are actively involved in supporting the business in an advisory capacity.

Plans for leasing an initial building to house the distillery were scuppered largely by a change to the hazardous substances storage regulations – but John Bougen, a major shareholder, saved the day by offering a heritage building (a former general store) he owned on Smith Street. “Together with a team of able hands John transformed a previously tired and forlorn building into a beautiful and fitting home for our distillery,” says Patsy.

Opening day for the Reefton Distilling Company was October 17th, 2018, and it was far from the originally planned ‘soft launch’. Reaction from locals and customers, as well as product sales, have far exceeded expectations. Several event companies have since approached management for information on capacity and hire costs, and the start-up hosted its first premium boutique travel provider familiarisation the same month it opened. Bookings for distillery tours and tastings already stretch out to November 2020.

The distillery, open seven days a week, has had its production capability severely tested by the high level of sales. The next test involves upscaling the business and producing a world-class whisky product to join their Little Biddy Gin range, Wild Rain Vodka and seasonal fruit liqueurs (whisky production was delayed by the switch of buildings).

“Early signs point to our business being every bit as successful as we dreamed it would be,” says Patsy. “And we’ve created a suite of products which we believe have international appeal.”

An export strategy is being developed with NZTE assistance, encouraged by the level of interest from various markets. Ireland is already on the radar, thanks largely to the connection with Little Biddy.

For Patsy, her life really has been a case of coming full circle. She has found the whole experience totally uplifting, and you can sense her pride in what has been accomplished so far.

“With both parents no longer alive, there is a real comfort being back here and at times I wish they could see what we’re doing for the town they loved so much. I get a real thrill when a little old person pops into the distillery and tells me they knew my parents, and shares a tale or two. We hope that New Zealanders will continue backing us by buying our products; knowing that in doing so they are supporting employment in the region.”